Please Bail Me Out!

I'm in "jail" this weekend raising funds for the Center for Creative Learning, to allow more vets and survivor of trauma to get support in their healing. Please help me raise bail! There are three options for donation:

You can also learn about My Life at the Center.

Thank you!
Posted by Jay Edgar at 1:47 PM No comments:

My Life at the Center

When I was 25, I fell in love for the first time. It was with someone I'd known for over a year. The spark of attraction was there the whole time, but couldn't be acted upon due to the nature of the relationship. After that period passed, a relationship formed that was full of passion, urgency, longing, seeming-fulfillment, etc. It didn't last long—any objective observer would have seen it coming, needing no more clues than the first sentence of this post. 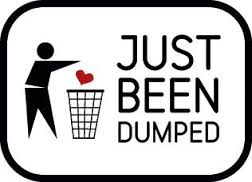 It was a difficult time. I did some therapy, which helped a lot. After a few months, my therapist suggested I do a weekend called Taking It Lightly at the Center for Creative Learning. Two months later, November 4-6, 1992, I sat in the front row of chairs in the course room at 7 pm on a Friday night of this workshop.

I had a transformative weekend with 11 other students and a staff of a dozen people or so. We all shared what was challenging in our lives, and things that happened earlier in our lives that led us to make the "old decisions," as they're called, that keep us from thinking clearly about our life currently, which then keeps us from getting what we want.

Mid-morning on Saturday of the workshop I remember looking at the purple directors chairs that instructors used while teaching and thinking, "One day I'm going to sit in that chair."

Immediately after the workshop I felt like a million bucks. It was very freeing to let out some pain and make new decisions and support others in doing the same. I wondered if this high would disappear after the weekend, and I'd return to be the person I was before the weekend.

I didn't. I found myself wanting to learn and grow more. I joined the volunteer assistant staff at the next three monthly Taking It Lightly weekends, then in March 1993 I started a 10-month instructor training program called the Professional Excellence Program (affectionately called PEP). I continued to assist each month and soon began apprentice instructing Taking It Lightly, then in 1993 co-instructed PEP. I continued to apprentice-instruct, then co-instruct the weekend until I became a Certified Instructor in 1998. Being certified means that I can teach anywhere, anytime, alone if necessary (although this is never optimal, as I would later find out).

The Center for Creative Learning is owned and operated by Patricia Clason, who has been doing self-development/healing work for many years. Other programs are also available at the Center, including Taking It Lightly—Renewal, which is a weekend specific to those who have experienced sexual abuse, and Healing Warrior Hearts, which supports military personnel and their families.

The work of the Center has also gone beyond the building where it resides in Milwaukee, all the way to other parts of the country. Taking It Lightly was held for years in Madison; it has been held numerous times in the Detroit area, and I've had the honor of instructing there around 30 times. I've also taught in Indiana, North Carolina, and even Windsor, Ontario, Canada.

Thousands of people have been through weekends offered by the Center. Their experiences have affected them, as well as the people in their lives. There are currently a second and third generation of people born to those who have done the weekend, many of them attending weekends as well. And grads live throughout the world. The ripples created by Patricia and the Center spread through the world as well.

The heyday of courses like Taking it Lightly was the 70s. During the 20+ years of my involvement, I have witnessed a slowdown in people attending such courses (there and elsewhere). With the downturn in the economy and the overall pressure in a capitalistic society of being productive and creating income for others being touted as being most important, people have less time and money to look inward and give outward. While the Center is legally a for-profit entity, it has always operated as a not-for-profit. Any income from courses has always gone right back into the Center.

The societal pressure I mentioned above has created an environment where income from courses is not sufficient to support the Center. This weekend we are holding a fundraiser at the Center, to make more funds available for scholarships to programs and the Center itself. My "wanted" poster: 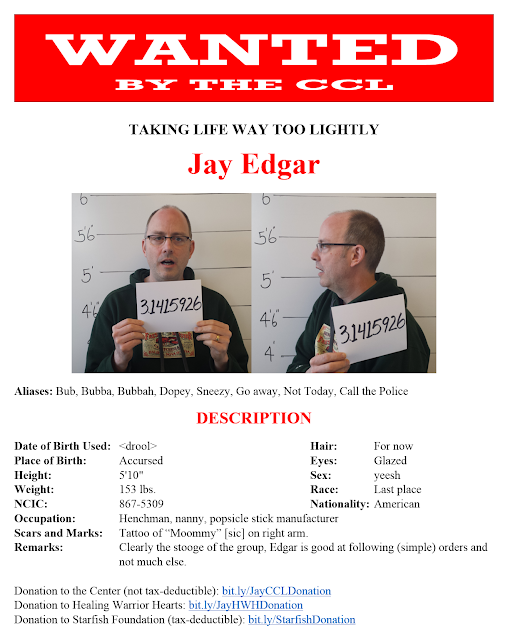 During the weekend, we will be hosting Google Hangouts of us playing improv games, etc. I invite you to watch for me on Facebook (you need to be a friend to see) and Google Plus (public) to find out
when we'll be online.

I also invite you to make a contribution to the Center and its programs:
Thank you for your consideration.
Posted by Jay Edgar at 1:53 PM 3 comments: